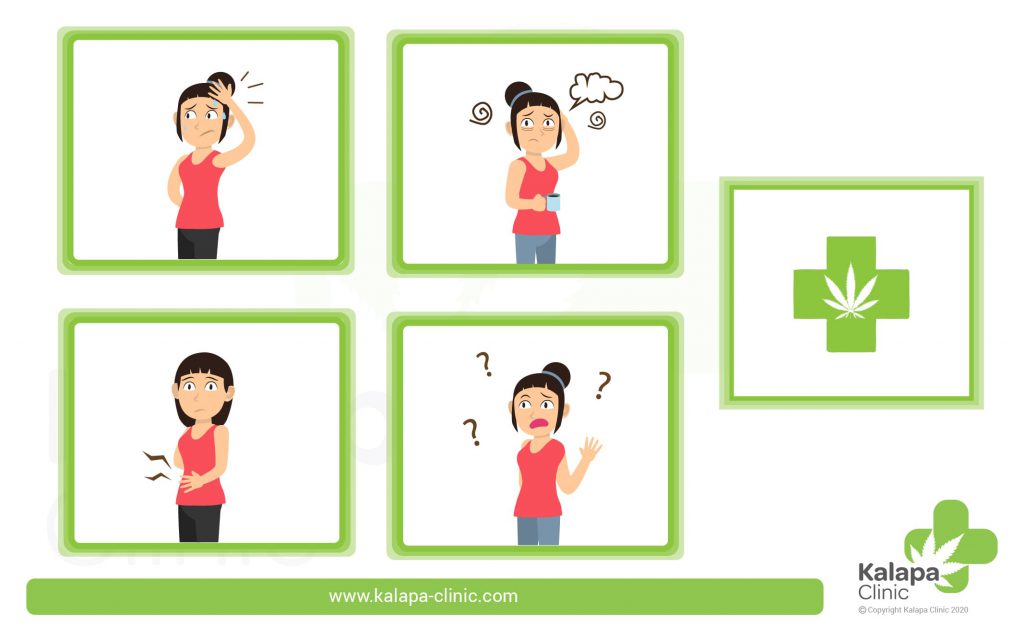 At some point over the age of 40, fertility decreases for most women. This process is completely normal. However, this phase of upheaval and hormonal change can be marked by massive physical complaints such as mood swings, hot flashes, and sleep disturbances. In some cases, this has a considerable impact on the quality of life of the women affected. Cannabinoids can help to improve symptoms during this time.

Between the ages of 40 and 50, a woman’s menstrual cycle begins to become irregular. The body gradually reduces the production of the female sex hormone oestrogen. This period of hormonal change is called menopause or the climacteric. It is the transition from the reproductive (fertile) phase to an infertile phase of life.

On average, women in Central Europe experience their last menstruation at the age of 52. However, deviations of several years in one direction or the other are possible. This time is called menopause. Once menopause is reached, a woman can no longer become pregnant. A woman’s eggs are already forming when she is still an embryo herself. At the time of menopause, this quota of eggs – the so-called follicle pool – is no longer viable for reproduction.

The time at which a woman reaches menopause can only be determined retrospectively, after menstruation has stopped for 12 months. Now the post-menopause phase begins.

Doctors divide the menopause into the following phases:

When the first climacteric cycle disorder occurs varies greatly from woman to woman. The course of the menopause, its duration, when the accompanying symptoms appear, how long they last and how intense they are – all this is very individual.

“For example, about one third of all women are almost symptom-free and one third have moderate complaints that can be compensated by lifestyle interventions. However, one third of the women suffer from severe complaints requiring therapy, which sometimes have a considerable impact on their quality of life”. [1]

During menopause, the female body has to adapt to the increasing oestrogen deficit. Possible complaints are irregular menstrual cycles, sometimes accompanied by pain, soreness of breasts, and migraines. Hot flushes and outbreaks of sweating are frequent.

Changes in the vagina (atrophy of the squamous epithelium) can lead to pain during intercourse, vaginal dryness, and problems urinating (micturition problems). Dizziness, headaches, constipation, and loss of libido can also occur.

Some women also suffer from mood swings, up to and including depression or anxiety. Other psychological symptoms can include sleep disturbances, restlessness, and irritability.

Complaints / symptoms of the climacteric:

After menopause, the typical climacteric symptoms often remain for several years. As the mucous membrane of the vagina changes and no longer produces as much moisture, symptoms such as pain during sexual intercourse and vaginal infections can occur. Other problems can include dry skin, hair loss or hair growth on the face, as well as muscle and joint pain. The risk of osteoporosis increases because of the lower oestrogen levels.

The most common medical treatment for menopausal symptoms is hormonal replacement therapy, called HRT or HT. This usually involves taking an oral combination of oestrogens and progestins so that they work systemically, i.e. throughout the body.

The benefits of hormone replacement therapy have been clearly proven, but there are also some risks. Doctors now believe that HT has a small increase in the risk of breast cancer (breast cancer). The risk of cardiovascular disease and thromboses can also increase with hormone replacement therapy, as can the risk of ovarian cancer. HT should therefore only be used after the patient has carefully weighed up the possible advantages and disadvantages as well as the risk factors together with the doctor. [1]

Hormone preparations that are applied locally to the skin, for example in the form of creams, suppositories, or sprays, are also used to treat the vaginal mucosa. These can also be combined with hormone-free moisturising agents such as lubricants and creams. Alternative therapies include neural therapy or phytotherapeutics – i.e. drugs made from plants – with an oestrogen-like effect.

Cannabinoids can help before and after menopause

Another possible alternative for treating menopausal symptoms is cannabinoids. The endocannabinoid system in our body regulates mood, pain, the sexual organs and much more. All these areas are affected by the hormonal changes that occur during menopause.

Cannabidiol (CBD) plays an important role here, as the non-psychotropic active substance of the cannabis plant is not covered by the narcotics law. It is therefore not subject to the strict rules on prescription, as is the case with tetrahydrocannabinol (THC). CBD is much easier for doctors to prescribe and is even available without a prescription.

A review paper from 2017 summarised the state of research on cannabis and sleep until 2014. The results suggest that cannabidiol (CBD) may have therapeutic potential for the treatment of insomnia. It also showed that tetrahydrocannabinol (THC) has the ability to reduce the time it takes to fall asleep. At the same time, however, there is a risk that the active substance might affect sleep quality in the long term. [2]

In 2019, a recent review also looked at existing studies on cannabinoids and sleep. These are mainly studies that look at the use of cannabinoids in the treatment of chronic conditions like multiple sclerosis, post-traumatic stress disorder (PTSD) and chronic pain.

This review shows that cannabinoids can improve sleep quality, reduce sleep disturbance, and shorten the time people fall asleep in [3]. Many of the trials reviewed have a positive effect on sleep. However, the researchers’ criticism is that the samples are small and the effects on sleep were only studied as a secondary outcome in connection with another disease.

A new, randomised, double-blind clinical trial is closing this gap and specifically looking at the effectiveness of a medical cannabis product in treating chronic insomnia. The study conducted by the Centre for Sleep Science at the University of Western Australia achieved positive results and showed that cannabis therapy is effective and safe. [4]

Participants treated with medical cannabis fell asleep more quickly and for significantly longer. After waking up, they were able to go back to sleep more quickly. The treatment led to significant improvements in quality of life. This included the feeling of being rested after sleep, feeling less stressed and less tired. Overall, the participants felt that they “functioned better” [4].

More and more people are using CBD for various complaints, but few studies have investigated the reasons for the increasing use of CBD. For this reason, researchers used an online survey to find out what people use CBD for and how satisfied they are with it. The results of the anonymous survey show that almost 62 percent of CBD users use the substance to treat a disease. The three most frequently mentioned diseases were pain, anxiety, and depression. [5]

Nearly 33 percent of the respondents reported that CBD “handles their complaints very well on its own”, while only 4.3 percent said CBD had a “not very good” effect. The scientists therefore conclude that people use CBD as a specific therapy for a variety of different diseases, but especially for pain, anxiety, depression, and sleep disorders.

Several pre-clinical trials with rodents have confirmed the significant antidepressant effect of cannabidiol. However, a detailed understanding of how CBD works against depression is still lacking. Another study with mice suggests that the antidepressant effect induced by CBD depends on serotonin levels in the central nervous system. [6]

A number of different types of pain can occur during menopause, such as headaches, joint pain and severe menstrual pain. Cannabinoids have a positive effect on chronic pain. However, the analgesic (pain relieving) effects of cannabis have not been sufficiently researched.

A 2018 review concludes that cannabinoid drugs can prevent the onset of pain by slightly raising the pain threshold, but not by reducing the intensity of the pain. Instead, cannabinoids can make pain feel more bearable. [7]

There is now ample evidence that cannabinoids have a therapeutic benefit in pain. This also applies to the treatment of migraines and headaches. This has been shown in a meta-study from the USA. [8]

Another interesting piece of research from the USA has looked at what symptoms cannabis patients treat with their drug. For this study, data from more than 2,000 people were analysed. The research showed that chronic pain, in particular, was treated with cannabinoids. 24 percent of the study participants said that they used cannabis for their headaches or migraines. [9]

Cannabinoids use during menopause

There are many studies that have looked at the effect of cannabinoids on different menopausal symptoms, such as pain, mood swings and sleep problems. These trials show that cannabinoids can help and relieve symptoms.