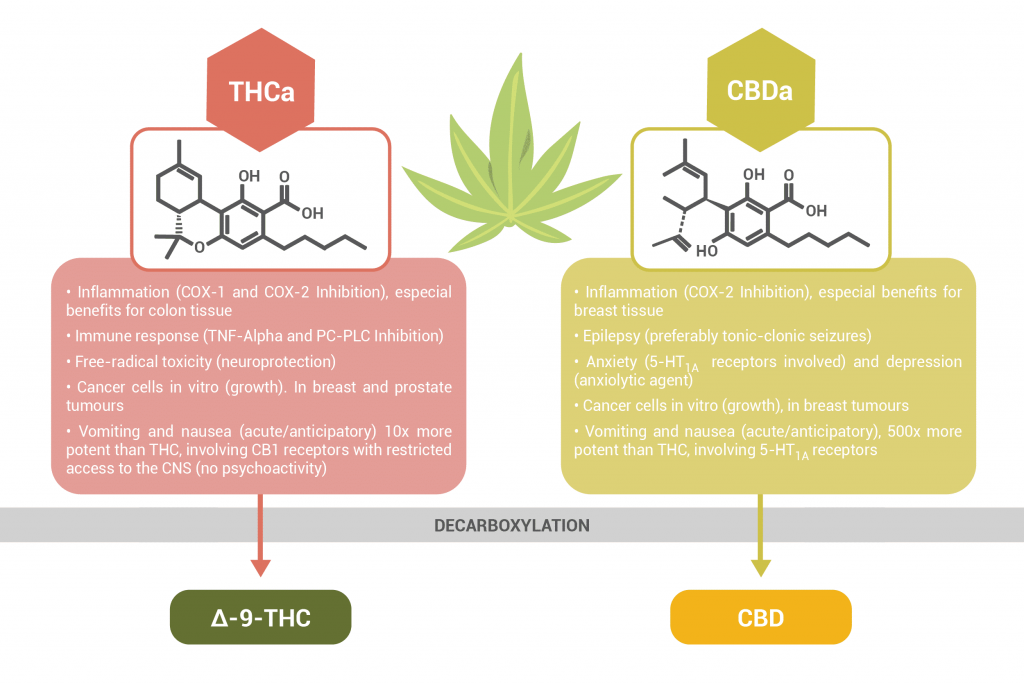 As already explained in many of our articles, cannabinoids are classes of chemical compounds acting on specific receptors in brain and body cells, that alter and/or regulate many physiological functions, modulating signals in the endocannabinoid system. Today we want to talk you about THCa and CBDa, two cannabinoid acids.

While so far CBD and THC are generally considered as the medical power of the plant, in this article we will make a brief summary of the latest finding on the benefits of two cannabinoids acid: THCa and CBDa.

Phytocannabinoids in the growth of cannabis plant

In 1963 a group of research[1], led by Dr R. Mechoulam, isolated and reported CBD’s chemical structure. A year later, the same group finally succeeded in isolating also THC and also to elucidate its exact structure[2].

Few years later, for a better understanding of the biogenesis of cannabinoids, the group figured out to be essential the isolation and classification of all cannabinoid acids[3]. Alongside cannabidiolic acid, the cannabinolic and cannabigerolic acids were identified. Followed have been also classified two ∆⁹-THC acids, A[4] and B, as well as ∆⁸-THC acid and cannabielsoic acid.

After that a possible pathway for the biogenesis of cannabinoids in the plant has been published, the group assumed that it is possible that some of the natural neutral cannabinoids are artefacts formed through different processes: decarboxylation, oxidation (cannabielsoic acid), photochemical cyclization (cannabicyclol), or isomerization (∆⁸-THC and ∆⁸-THC acid) of other constituents[5].

The two main cannabinoids, THC and CBD, don’t exist in their neutral form in the cannabis plant. During the growth of the plant, in fact, they show up in their acid form, as THCa and CBDa. Once these acid cannabinoids are heated, a chemical reaction takes places called “decarboxylation”, commonly known as activation.

As a result of heating, this two cannabinoids change form to become THC and CBD. This heating process can be the result of smoking, vaporizing, heating a mixture of butter and cannabis, but it actually start in a small part during the drying process of the plant, once it is ready.

Regarding THC, the activation of THC-acid in order to obtain decarboxylated form is what makes THC psychoactive[6]. Consuming THC-acid will not provide any “high” feelings since it works on different pathways that not cause any psychotropic effects. When decarboxylated the molecule changes its structure by eliminating a carboxyl group (COOH) from its acid composition. This conversion transforms cannabinoid acids into a neutral state which interacts with CB-1 and CB-2 receptors and provides psychoactive effects, most commonly associated with ingesting or smoking cannabis.

While we understand the psychoactive and therapeutic benefits of neutral cannabinoids, how does the original acid molecule interact with the human body?

When talking about such advanced-level physiopathological concepts, it’s better to have a look at how these acid compounds work in nature.

Once cannabis reaches its maturity, THCa accumulates in high concentrations along the flowers and leaves. Its purpose is to induce cellular death, known as necrosis, by creating a pathway through the mitochondrial membrane of cells. This action keeps the mature plant healthy by force eliminating dead, dying or damaged cells.

Humans feature a similar mechanism, referred to programmed cellular death[7]. This term is common when discussing cancer as an error in programmed cell death allows diseased cells to remain active. The proliferation of these diseased cells can then result in cancer. While this is an important finding, it still doesn’t fully answer how these cannabinoids support human health, and further studies on THCa are needed.

So far, we know that cannabinoid acids seem to do not interact with cannabinoid receptors. THCa and CBDa engage with the human endocannabinoid system by altering the efficiency of four primary functions: COX-1 Release, COX-2 Inhibition, TNF-Alpha Inhibition, Interleukin-10 Release[8]. Ultimately, this means these cannabinoids actively support our own body’s ability to reduce inflammation, boost the immune system, performance and significantly lower overall pain levels.

Although substantial research on CBDa is lacking, preliminary evidence in the lab suggests that CBDa may help in four distinct therapeutic areas. These include:

Laboratory research in vitro has shown that CBDa has potential anti-inflammatory properties, due to the inhibition of COX-2 (cyclooxygenase) activity[9]. COX-2 is expressed by cells that are involved in inflammation and has emerged as the isoform primarily responsible for the synthesis of prostanoids (PG – a group of complex fatty acids) involved in acute and chronic inflammatory states of pathological processes[10].

Classical nonsteroidal anti-inflammatory drugs (NSAIDs) have shown to inhibit both COX-1 and COX-2 activities. Inhibition of COX-2-dependent PG synthesis accounts for the anti-inflammatory and analgesic effects of NSAIDs, whereas suppression of COX-1 can lead to many unwanted side effects.

Thus, it has been assumed that specific inhibitors for the COX-2 enzyme might have ideal therapeutic actions, similar to those of classical NSAIDs, without producing any adverse effects, caused by the inhibition of COX-1 activities.

CBDa against Nausea and Vomiting

Several studies have also shown the effect of CBD in reducing nausea and vomiting, through indirect agonism of 5-HT1A receptors located in the brainstem[11]. CBDa inhibits nausea-induced behaviour in rats by somehow enhancing the activation of 5-HT1A receptors, interestingly at a lower concentration than CBD.

It will also be necessary to seek out the mechanisms by which CBDa induces the enhancement of 5-HT1A receptor activation. This could be investigated by carrying out in vitro experiments with 5-HT1A-transfected cells that do not express other types of receptor. Moreover, CBDa has also shown the ability to suppress both toxin- and motion-induced vomiting in shrews.

In a patent registered in 2015 by GW Pharma[12], the anti-seizure effect of CBDa has been studied and explained. Having already a CBD-based drug for treating rare types of epilepsy, such as Dravet Syndrome, the company noticed some limitations, such as the poor bioavailability of the product and its need to be administered at high dosing.

GW Pharma has found that by adding lower amounts of CBDa the therapeutic effect of the drug was more potent, in terms of faster action and stronger effect, and less likely to cause side effects. Moreover, it had a superior bioavailability, which they suggested could mean a quicker onset of the effects. In fact, the company envisage combining both cannabinoids as an anti-epileptic drug, as CBDa may be useful in providing a rapid onset effect, whereas the CBD may be useful in providing an extended effect.

CBDa may help with Anxiety and Depression

CBD’s anti-anxiety effects have been much remarked by many studies on humans with social anxiety and depression. Like CBD, CBDa activates the serotonin 5-HT1A receptor, also known to modulate feelings of well-being and anxiety. In a study, conducted on rats and published on European Neuropsychopharmacology[13], was shown that CBDa provided antidepressant effects at doses 10-100 times smaller than CBD, but further researches on humans are needed.

CBDa has lately shown possibilities to inhibit cancer growth. The link between cancer and the acid form of CBD was demonstrated in a study of 2012 on breast cancer cells[14]. In this study was explained that CBDa can be involved somehow in cancer growth through the suppression of COX-2 enzyme, a major instigator of breast cancer metastasis, as well as other forms of tumours[15].

In similar ways, both THCa and CBDa have shown their anti-inflammatory effects, which make them a potential cancer-killer. A Swedish study of 2011 on the evaluation of six different cannabinoids[16], including also their acid forms, found that all six of these substances together provided a strong effect on inflammatory processes in laboratory colon cancer cell lines. They have shown that through the interference with the inflammatory process, they are able to inhibit cancer cell proliferation.

While the real effectiveness of THCa and CBDa is still under investigation, the use of these acidic cannabinoids within the modern cannabis industry shows great promise and is worth investigation by researchers and cannabis experts.

The existing research on the medical benefits of both THCa and CBDa, especially regarding inflammation and cancer, already leaves great hopes for those who want to deal with cannabis treatments, without dealing with any psychoactive effects. Hopefully, with more research on the whole cannabis plant, and not just on CBD and THC in neutral form, a better understanding of every existent in nature cannabinoids will permit further and different approaches and methodologies based on medical cannabis.

[12] Colin Stott, Nicholas Jones, Robin Williams, Benjamin Whalley (2017). Use of cannabinoids in the treatment of epilepsy. International Publication Number: WO 2017/025712