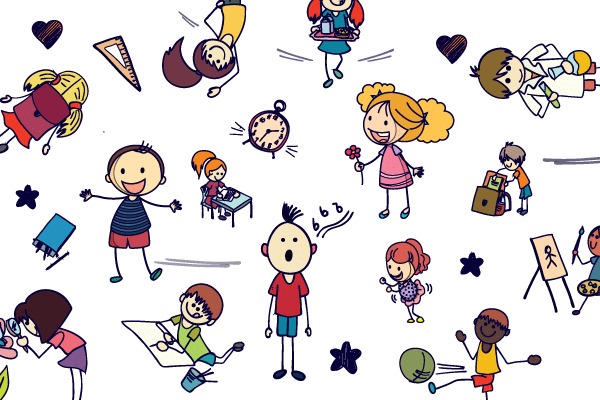 Attention deficit hyperactivity syndrome (ADHD) causes considerable stress for the children and adolescents affected, their families as well as their social environment. The disorder often persists into adulthood. Many adult ADHD patients report that cannabis therapy helps them to cope better with everyday life, as the treatment makes them more concentrated, calmer and more focused. However, research on cannabis and ADHD is still in its infancy. So far there are very few and small studies available that give cause for cautious optimism.

ADHD is the abbreviation for the attention deficit hyperactivity disorder. The disease belongs to the hyperkinetic disorders. ADHD is one of the most common child psychiatric disorders in Germany and doctors diagnose it more often in boys than in girls. Furthermore, the frequency of ADHD sufferers increases with decreasing social status. [1]

In order to be diagnosed with ADHD – formerly also called hyperkinetic syndrome – the symptoms must first appear before the age of 7 and last for at least six months. In addition, they must be observed in different situations, such as at home and at school.

ADHD children are inattentive and do not complete activities once they have started. They do not listen, are impulsive and make careless mistakes. The affected children tend to be restless and cannot sit still. They talk a lot and in an uncontrolled way without taking other people into consideration. In addition there is the symptom of low frustration tolerance.

ADD stands for attention deficit disorder. Those affected are also inattentive and can be quickly distracted, but do not suffer from the hyperactive behavioural disorder. There is no fundamental difference between ADHD and ADD. Since the affected children and adolescents are not hyperactive, their disorder is not noticed so quickly.

The causes of the hyperactivity disorder are not yet fully understood. However, there is a genetic component to the disease – and so the disorder is more common in some families. Other factors can promote the development of the disease, such as disturbed family structures (parent-child relationship) and traumatic experiences.

Medical experts primarily hold a signal disorder in the brain responsible for the attention deficit hyperactivity disorder. The frontal lobes are less active in ADHD patients. Therefore, information processing between the different brain regions is impaired. Responsible are the messenger substances dopamine, noradrenalin and serotonin, which are not sufficiently available.

As a consequence, the brain of hyperactive children and adolescents does not sufficiently filter the incoming information. As a result, the brain is overstrained and those affected can hardly concentrate and are restless.

In addition to the typical symptoms of attention and hyperactivity disorder, other impairments frequently occur. These can be partial performance disorders, such as dyslexia. Other mental illnesses, such as depression, are not rare. Impairments in social behaviour are also typical, as are emotional problems and anxiety disorders, especially in adult life.

In an estimated 30 to 50 percent of those affected, ADHD persists into adulthood [1]. However, the typical ADHD symptoms change with the transition from adolescence to adulthood. In most cases, motor restlessness decreases in these patients. However, the feeling of inner restlessness is pronounced and attention deficits come to the fore. As the hyperactivity decreases, the disease is less noticeable and so for a long time doctors have believed that ADHD does not exist in adulthood.

The diagnosis is based on the following symptoms:

If a physician makes the diagnosis of ADHD / ADD, a so-called multimodal therapy is carried out, which is composed of different components. These may include behavioural therapy, parent training and curative education measures.

Methylphenidate (Ritalin, Concerta) is usually used for drug treatment. Amphetamines like methylphenidate are narcotics. They are supposed to increase mental performance by improving concentration and short-term memory. They can also improve aggressive behaviour and lighten the mood.

This is also confirmed by a systematic review from 2019 on the topic [2]. This analyses data from all case studies and clinical trials of medical cannabis for all major psychiatric disorders. ADHD is one of them. The researchers conclude that there is little positive evidence on the effect of cannabis as a medicine in ADHD. Due to the lack of evidence it is premature to recommend cannabinoid therapy for this disorder.

These results are confirmed by another recent meta-study from 2020 on cannabinoids for the treatment of mental disorders. This study also concludes that there is “little evidence” that cannabis as a medicine improves ADHD symptoms [3].

Effectiveness of cannabis in ADHD

The reports of ADHD patients show that affected adults often use cannabis for self-medication and have had good experiences with it. A study carried out in 2017 at King’s College in London illustrates the need for further research into the links between ADHD and symptom improvement through cannabis [4].

The randomised, placebo-controlled pilot study involved 30 adult ADHD patients. They received either the mouth spray Sativex (active ingredients: THC and CBD) or a placebo for six weeks. The participants treated with the cannabis drug reported a significant improvement in hyperactivity and impulsiveness without impairing cognitive abilities. In general, the cannabis drug was well tolerated, but there was a case of severe side effects with muscular seizures and convulsions.

According to the researchers, this study provides “preliminary evidence that supports the theory of self-medication of cannabis use in ADHD and the need for further studies of the endocannabinoid system in ADHD” [4]. For research purposes, however, the present study is only a small indication that medical cannabis might be helpful in the treatment of ADHD, as the number of participants was low.

In 2015 Dr. Franjo Grotenhermen and Dr. Eva Milz presented a study of 30 adult patients with therapy-resistant ADHD. All participants had at that time a necessary exemption for the use of medical cannabis in the form of cannabis flowers, cannabis extract or dronabinol. In all patients an improvement of the overall condition could be observed after cannabis therapy. Especially symptoms such as sleep disorders, impulsiveness and concentration difficulties improved.

Conclusion: Is cannabis helpful in ADHS?

Anyone investigating the study situation regarding the medical use of cannabis in attention deficit hyperactivity disorder will find a few encouraging results. From a medical point of view, however, the evidence is limited. On the other hand, there are various case reports from patients, treating physicians and clinics who report that cannabis improves the ability to concentrate in ADHD. It also has positive effects on problems such as insomnia, depression and impulsive behaviour.

Cannabis seems to have a different effect in people with ADHD than in people who are not affected by the disorder. The exact relationship between the effects of cannabinoids on the endocannabinoid system of ADHD patients will hopefully be further investigated in the future.